WEAVER , PAULINE , born in White County, Tennessee, about 1798; son of Henry Weaver, a Virginian, and the daughter of’ a Cherokee Chief; married ___; son, Ben, who was killed by Apaches between Wickenburg and Date Creek, A. T., about 1866. Left home in early life and went to the far Northwest as hunter and trapper for the Hudson Bay Company; came to the Southwest to trap beaver on the Gila about 1830; said to have been with the Ewing Young party which went from New Mexico to California, 1831; his name is written on the inner wall of Casa Grande Ruin with the date 1832; engaged by General Stephen W. Kearny to guide the Mormon Battalion across what is now Southern Arizona to California and reported to Colonel Philip St. George Cooke on the Rio Grande in New Mexico, November 2, 1846; obtained a grant of 2800 acres of land in San Gorgonio Pass near the present town of Banning, California, and from there engaged in trapping on the Colorado River; was living at his Ranch there in 1853.

Listed, U. S. Census, July, 1.860, at Tucson, as Powell Weaver, Old Mountaineer, age 63, born in Tennessee, property valued at $2100; discovered the gold placers on the Arroyo de la Tenaja near La Paz late in 1861; met a party headed by A, H. Peeples at Yuma and was with them at discovery of gold at Rich Hill and the Weaver Diggings in May 1863; had a home on the Hassayampa below Walnut Grove, 1864, in which year he was wounded on the Copper Basin Trail by an Apache-Mohave arrow, the head of which remained under his left shoulder blade; listed as Paulino Weaver, Territorial Census, April 1864, 3d District, (Yavapai County), age 66, born in Tennessee, married, family in New Mexico, resident in Arizona 7 years, occupation, Trapper and Guide, property valued at $300. Employed as Pauline Weaver as Spy and Guide at $15 per day at Ft. Whipple, I A. T., from July 29 to August 25, 1865; transferred to Ft. McDowell,Arizona Territory, until October 10, 1865 at $101.35 per month; transferred to Ft. Whipple as Guide at $75 per month until December 31, 1865; employed at Ft. Whipple, July 10, 1866 as Guide at $55 per month and stationed there until November 1, when he was transferred to Camp Lincoln (Camp Verde) on the Verde River where he served until his death on July 21, 1867; buried there but his remains were removed to the National Cemetery at the Presidio of San Francisco, 1892; authority was obtained from the War Department by the Boy Scouts to remove his remains to Prescott, where they were reinterred on October 27, 1929, and a monument to his memory was erected.

The town of Weaver, Weaver Creek, Weaver Mountains and Weaver Peak in Yavapai County, Weaver Pass in Yuma County and Weavers Needle in Pinal County, Arizona, all named for him. 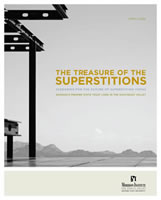 The Treasure of the Superstitions: Scenarios for the Future of Superstition Vistas: Scenarios for the Future of Superstition Vistas is the result of an effort by a group of public and private entities to think about state trust land and urban development in new ways. In fact, seldom in the history of the U.S. has there been a chance to envision the future of one piece of property, this large and this close to a growing metropolitan area. Never has such an opportunity been coupled with public ownership and public benefit.